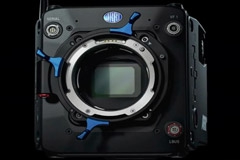 Onsemi (Nasdaq: ON), a leader in smart power and intellisense technologies, announced the development of a custom high-end CMOS sensor for ARRI's ALEXA 35 camera. The camera uses ON Semiconductor's ALEV 4 Super 35 4.6K CMOS image sensor with a resolution of 4608x3164 pixels (14.6 megapixels), a pitch of 6.075 microns, an RGB color filter, and a maximum frame rate of 120 fps. The sensor incorporates ON Semiconductor's latest technologies for optimized pixel response, high dynamic range technology (HDR) and improved pixel consistency at high-speed readout; these technologies are also deployed on ON Semiconductor's mainstream sensors.

The latest collaboration between the two companies is yet another example of ON Semiconductor's strength in developing sensors to enhance image quality for high-end cinematography. This unique high-resolution, large-pixel image sensor utilizes optimized readout technology to produce 4.6K images with 17 stops of dynamic range at 120 fps for unprecedented image quality. The extended dynamic range enables high-contrast scenes with greater detail in a single frame, resulting in an exceptional image and color experience.

Walter Trauninger, Managing Director and Head of the Camera Systems Business Unit at ARRI, said: "All of ARRI's digital cameras - starting with the first ARRIFLEX D-20 in 2005, through to the first ALEXA delivered in June 2010, to Launched this year, the ALEXA 35 is based on a CMOS sensor jointly developed with ON Semiconductor. The close collaboration between the two companies is the basis for ARRI to provide filmmakers with excellent overall image quality. This long-term commitment to the rapidly changing semiconductor market China is definitely an exception and is invaluable to ARRI."

Building on the evolution of the ALEXA series over the past decade, the ARRI ALEXA 35 camera takes digital cinematography to new heights. During the 75th Cannes Film Festival in 2022, 30 of the 49 premieres will feature ARRI’s ALEXA series cameras, including the Palme d’Or winner Triangle of Sadness, all with ON Semiconductor’s custom CMOS images sensor.

Ross Jatou, Senior Vice President and General Manager of the IntelliSense Division of ON Semiconductor, said: "Working with ARRI to develop the image sensor for the ALEXA 35 camera demonstrates our ability to develop low-cost, high-quality, high-end sensors with optimal performance. 22 years of close collaboration exemplifies our commitment and expertise in delivering image sensors to the high-end digital cinematography and machine vision markets."